msterscary wrote: A) I guess somethings will never change (the Lith/ Rattle thing)

That thing will never change till he drops off the face of this earth!

Hell no! I am going to accept his half hearted apologies only for him to flip out and say vile things about me. He is officially on my shit list and will never earn my respect. He had he chance which he ruined. That man is psycho. As if you didn't already know that:-D

B) I guess somethings DO change. (Lith back in school- congrats)
Yay me! I'm actually doing quite well in school too. Next semester I think I may take on five classes.

You can always buy new underwear cause I would assume you have skid marks on yours! tehehehehehe
BLAH BLAH BLAH

Less More
9 years 3 months ago #22 by almostgone
Replied by almostgone on topic Sitting in math lab.
lmao glad you all are doing good

Less More
9 years 3 months ago #23 by lithiumbaby
Replied by lithiumbaby on topic Sitting in math lab.
Yes change is good and I feel like a new person!
BLAH BLAH BLAH

Less More
9 years 3 months ago #24 by ashley25
Replied by ashley25 on topic Sitting in math lab.
Why do I keep reading this thread as 'Sitting in meth lab'?????? lawl

Ashley25 wrote: Why do I keep reading this thread as 'Sitting in meth lab'?????? lawl

Less More
9 years 3 months ago - 9 years 2 months ago #26 by misterpat
Replied by misterpat on topic Sitting in math lab.
PATERSON — The 84-year-old Alexander Hamilton Hotel, once an elegant downtown landmark that fell into deep decline in the 1970s, is set to reopen after 16 years of vacancy with ground-floor retail space and more than 100 rental apartments. 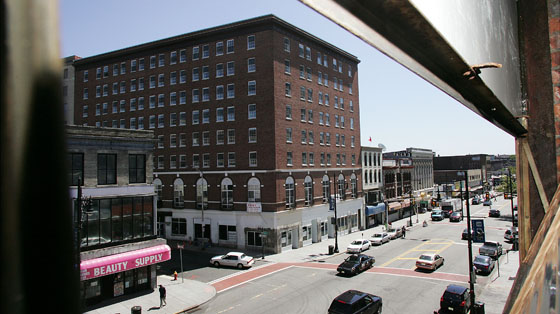 TARIQ ZEHAWI / STAFF PHOTOGRAPHER
A developer envisions Manhattan transplants living in the renovated Alexander Hamilton Hotel, which is to open at the end of summer with 105 apartments.


The hotel's renovation, nearing completion, is part of a larger makeover that includes the Fabian building, with the old Fabian Theater, next door on Church Street. When the Alexander Hamilton debuts at the end of summer, the developer envisions a building filled with young urbanites living and spending downtown, and city leaders consider the reopened hotel a key piece in the downtown's revitalization.

Valiotis invested $17.5 million to convert the historic hotel into 105 studio, one-, two- and three-bedroom apartments, and 14,000 square feet of retail space. The apartments feature oak hardwood floors, walk-in closets, gleaming white tile in the kitchens and bathrooms. Many of the apartments have views of the city's church spires and City Hall's clock tower.

Valiotis, 63, hopes to rent the apartments ranging from $800 for the smallest studio, at 400 square feet, to $1,500 for a 1,500-square-foot, three-bedroom apartment, all with heat and hot water included. College students from William Paterson University and Passaic County Community College will be among the renters, the developer hopes, perhaps with Manhattan transplants who would prefer less costly, but urban, dwellings. 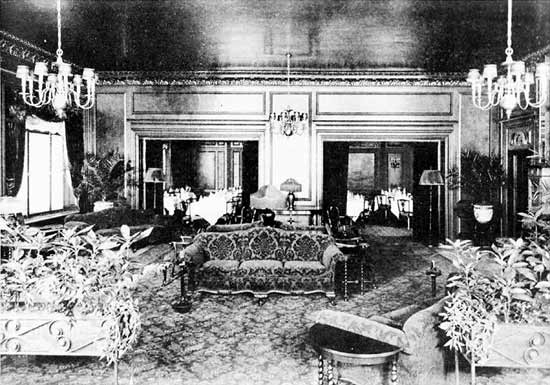 The opulent lobby in 1925 shortly after the hotel opened.


Valiotis estimates it's a half-hour commute between Paterson and Manhattan. "A lot of people don't have the $3,000 to $4,000 extra to live in Manhattan, so people can live over here and travel to Manhattan," he said.

Valiotis said he may consider selling the units as condos someday, but in view of the poor real estate market, it makes sense now to market them as rentals.
Hotel's heyday


The Alexander Hamilton Hotel has gone from grandeur to desolation in its 84-year history. The still-dignified structure has one more shot at redemption: a sweeping redevelopment as retail space and rental apartments.
Here's a brief history:

June 20, 1925
The Alexander Hamilton – built on the site of the old public free library — opens to fanfare. With eight stories and 219 rooms, the hotel was a $1.5 million Chamber of Commerce initiative, paid for with member dollars.

1970s to 1990s
The fortunes of the once-posh Alexander Hamilton fall with those of the city. The hotel is home to prostitutes and drug addicts; later, the state deposited former patients of state institutes for the mentally ill at the hotel.

Oct. 18, 1984
A hotel employee torches the building; 13 people die in the blaze, the worst Paterson fire in the 20th century.

1989
Developer Philip Rabinowitz makes the first of multiple attempts to purchase the hotel to convert it into senior housing units, but each of the proposals fails.

Feb. 23, 1993
The state shuts down the hotel for fire-code violations. Many of the homeless and mentally ill people housed at the hotel by welfare agencies and other institutions are forced to find shelter elsewhere.

2007
Developer Steve Valiotis buys the buildings and prepares to convert the Alexander Hamilton and the old Fabian Theater into 230 apartments. City leaders say the work would spur a downtown transformation, as work begins on the Center City retail and entertainment complex.

2009
Signs advertising ground-floor retail space and 105 rental apartments appear on the building as redevelopment at the Alexander Hamilton nears completion.

City officials say the renovation of the old hotel, built in 1925, reflects Paterson's efforts to revitalize the city's historic downtown. City Planner Michael Deutsch said the apartments should be attractive to renters because of the building's location — downtown within walking distance of the train station – and because many people are unable in this economy to buy homes.

"There's a desire to live downtown. Unfortunately, there are not a lot of apartments downtown. It was easy to convert it into a residential use," Deutsch said. City officials say the Alexander Hamilton's renovation, combined with the opening of Center City, a $100 million shopping mall with movie theaters and an arcade, will help stimulate the local economy.

Mayor Jose Torres said the reopening of the Alexander Hamilton represents "building on our past and planning for the future."

He said that as a child he attended his sister's wedding at the fabled hotel, and recalled that John F. Kennedy was among the famous people to visit the hotel's ballroom.

While the Alexander Hamilton will not reopen as a hotel, the city is in discussions to bring a hotel to South Paterson as part of an ambitious redevelopment plan initiated by St. Joseph's Regional Medical Center.

When it opened in 1925, the Paterson Evening News printed a special edition, and billed the new hotel as a "monument to a noted national character and a great civic asset to Paterson." The city's Chamber of Commerce financed the $1.5 million construction project in an effort to boost the city's status as a sophisticated metropolis. The News pointed out the building's unique architectural features: a Georgian-style lobby with dark-oak paneled walls, wainscoting from floor to ceiling, a marble staircase with a wrought-iron banister, crystal chandeliers and sconces. The colonial-style dining room boasted arches, pillars and an ornamental ceiling. The Elizabethan-style grille room featured a grapevine-motif ceiling and a raised stage for musicians.

In the main ballroom were Paterson-made mirrors and silk wallcoverings in gold and pale lavender. In the six upper floors, there were 200 suites.

When comedian Lou Costello visited his native Paterson after he'd become a star, he'd stay at the hotel and wave from his suite's balcony to adoring fans. Other notables who stopped at the hotel included aviator Charles Lindbergh, President Dwight D. Eisenhower and future President Ronald Reagan.

But the hotel began to suffer financial troubles and by the 1970s it had become a boarding house frequented by prostitutes and drug addicts. The state sent welfare clients in need of shelter to the Alexander Hamilton, and it became home to mentally ill people released from state institutions.

In 1984, an arsonist set off the city's deadliest blaze of the 20th century; 13 people died. Since 1993, when the state shuttered it for fire and safety code violations, the hotel has sat vacant.

Numerous developers since then attempted to buy and redevelop the property, but faced obstacles getting their projects off the ground. At one time, the city's school board proposed developing instruction and administrative space in the old hotel.

Valiotis believes he's succeeded because of 30 years of experience and knowledge of Paterson. His Alma Realty has developed several projects in Paterson, including the nearly completed Riverview Towers and 302 Main St.

"I am the heart of the town," he declared. "If this doesn't make it; nobody does."

Less More
9 years 3 months ago #27 by misterpat
Replied by misterpat on topic Sitting in math lab.
Fabian Theatre and Building

07/2010 Update: Local designation was pursued in the past few years but did not get passed, and the owner at that time decided that they could not rehabilitate it as planned. Since then the building has sat in very poor condition. A new owner has now taken ownership and has new plans for rehabilitation. They plan to do partial demolition of the theater on the rear of the building, but the two street facades will be restored. The building remains in a bad state currently, but some debris has been removed. The new owners have bought and restored other large buildings in Paterson in the past, including the hotel adjacent to the Fabian Building. The owner's past rehabilitation work bodes well for the future of the Fabian Building.

The Fabian theater, named for Paterson philanthropist and theatre-chain owner Jacob Fabian, opened in 1925. With more than three thousand seats, it was one of the largest movie houses in New Jersey. The theatre is in the crotch of a v-shaped building, both of which were designed by Frederick W. Wentworth, a prominent Paterson architect. He planned the theater as a stand-alone building and added the office space that encloses it as an afterthought.

In 1977, the big auditorium was carved into several smaller theater spaces. It continued operating until 1993, but since then the entire building has been mostly vacant.

A developer has been looking at the building, but a recent feasibility study that recommended rehabilitating the office space did not urge preserving the theatre. The Fabian Building is only a key structure in Paterson’s register-listed Downtown Commercial Historic District because of the theater in its core.

Who knows if a rehabilitated Fabian theater in Paterson could draw audiences like the Performing Arts Center in Newark or the War Memorial in Trenton. But it always takes vision to imagine a vibrant future in the midst of deteriorating plaster and blown-out windows.

In January 2004, the DEP approved the demolition of the Theater, overturning its earlier temporary denial which was based on the recommendations of the Historic Sites Council to evaluate all preservation possibilities. THe demolition plans will be reviewed by the Historic Preservation Office. The developer is also required to do a HABS level documentation, create an archival record and a museum quality interpretive exhibit documenting the Theater's history. A parking facility and office space for the Paterson Board of Education is to be built in the area after demolition. The office building will be rehabilitated.

Less More
9 years 3 months ago - 9 years 2 months ago #28 by lithiumbaby
Replied by lithiumbaby on topic Sitting in math lab.
The theater is in the crotch of a v-shaped building, both of which were designed by Frederick W. Wentworth, a prominent Paterson architect. Teehee they said crotch

Wow Pat! Thanks for the info! I really enjoyed reading that. I walk passed all the time and I like to peer in to the windows. When I took a peek inside you can tell the place was once grand. I should take pics with my phone to see if I can share them. Ewwwwwwww my cat is puking as I type. But yeah.... Thanks again!
BLAH BLAH BLAH