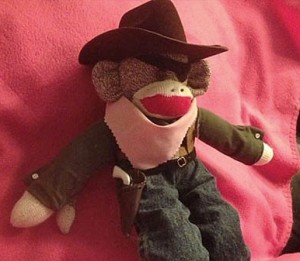 The TSA is not monkeying around when it comes to security at St. Louis' airport.

A woman at a checkpoint at Lambert-St. Louis International Airport said she was “appalled and shocked” after a Transportation Security Administration agent confiscated a tiny toy gun belonging to her sock monkey.

Phyllis May of Redmond, Wash., was travelling from St. Louis on Dec. 3 when she noticed a TSA agent inspecting one of her carry-on bags, according to NBC affiliate King 5.

May sells the dolls and had several sock monkeys and sewing supplies in the bag. One of the monkeys, named “Rooster Monkburn,” after John Wayne’s character “Rooster Cogburn” in the movie “True Grit,” is a cowboy with a two-inch long pistol.

May told King 5 the TSA agent took the monkey’s gun and informed May she was supposed to call the police.

“Rooster Monkburn has been disarmed so I’m sure everyone on the plane was safe,” she told King 5. “I understand she was doing her job, but at some point doesn’t common sense prevail?”

King 5 reported that the agent did not call police and May was able to keep her sewing supplies and other dolls and board the plane.

The TSA told NBC News in a statement: “TSA officers are dedicated to keeping the nation's transportation security systems safe and secure for the traveling public. Under longstanding aircraft security policy, and out of an abundance of caution, realistic replicas of firearms are prohibited in carry-on bags.”

[/b][/color]
Nor but in sleep findeth a cure for care.
Incertainty that once gave scope to dream
Of laughing enterprise and glory untold,
Is now a blackness that no stars redeem.