His name was once enough to strike fear into the heart of Depression-era Chicago but now crime buffs are being offered the chance to get up close and personal with one of the city's most infamous mobsters. 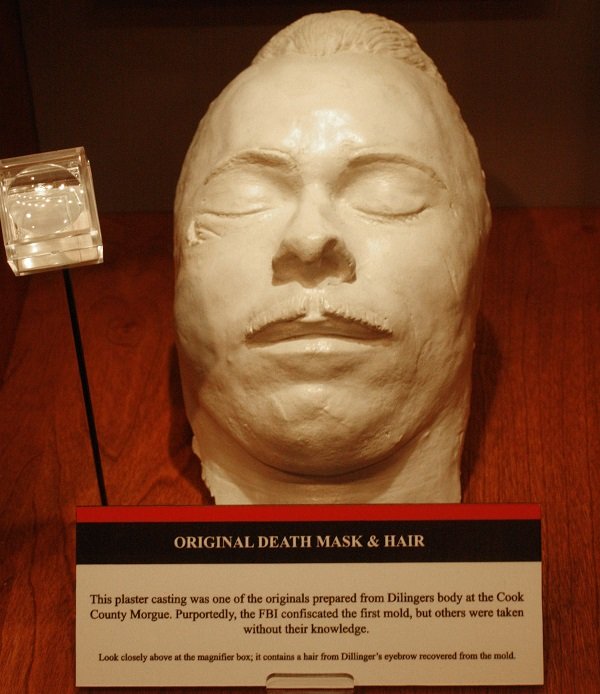 A plaster death mask taken of crime boss John Dillinger's face has gone on display today at the Illinois State Police Heritage Foundation Museum in Springfield.
It is part of an exhibition that encapsulates some of America's best-known gangsters including Al Capone and Baby Face Nelson, with newspaper pictures and maps of secret gang hangouts.

Dillinger was renowned for his daring bank robberies, turning over dozens of vaults in a short-lived career. On the few occasions he was arrested, he escaped jail.

For all his gun-toting heists, the mobster was thought to be behind just one murder. He was charged but never convicted of the homicide of an Indiana police officer who Dillinger fired at after the officer shot him in his bullet-proof vest.

In 1933, Dillinger was on the run after being wanted for robbery in four states. He returned to hide at his father's Chicago home and recover from a shooting wound but a brothel madam gave him up to police.
As FBI and police officers closed in on him at Biograph Theater on July 22, 1934, Dillinger attempted to escape once again. He died in a hail of bullets during the shootout with police at the age of 31.

Shortly after his death, four masks were cast of Dillinger's face, a common practice at the time to prove that the correct person was indeed dead.


ISPHF Museum president Ron Colley told CBS: 'The Dillinger death mask is symbolic of the Prohibition era when mob bosses and bootleggers struggled to control territory through violence with each other and with law enforcement.'

SON OF A GUN: HOW DILLINGER'S PISTOL IS STILL USED BY FBI CRIME EXPERTS TODAY
The FBI laboratory in Virginia houses almost every gun ever made - including John Dillinger's prohibition-era revolver.
Dillinger used a .45 calibre weapon in a string of bank robberies during the Depression. The vast collection is also home to mobster 'Pretty Boy' Floyd's Colt 1911 and Ma Barker's arsenal.
With an inventory of more than 7,000 weapons, the endless racks provide a reference point for the laboratory's firearms' examiners to support criminal investigations.
Among the more unique items in the collection are an old Thompson sub-machine gun hidden in a guitar case and a pistol hidden in cut out pages of a rare first edition of Gone With The Wind by Margaret Mitchell.
The unique collection includes accessories like silencers and muzzle attachments as well as more heavy duty weapons such as grenades and rocket launchers.
.Dillinger may have had the reputation as the most notorious - and most colorful - Chicago mobster but he had stiff competition from some deadly rivals.

Al Capone also reigned over the Chicago underworld with an iron fist. He was once king of the city's rackets and is thought to have personally killed several people and ordered the deaths of many others.
Capone ruled a multimillion dollar empire of illegal booze, gambling and prostitution throughout the 1920s.

His reign ended in 1931 when he pleaded guilty to tax evasion and prohibition charges.
The mobster served seven years and six months in federal prison, which included a stay at Alcatraz.
Capone was paroled in November 1939 but by that time, he suffered badly from paresis brought on by syphilis.
He went into seclusion at an estate near Miami, Florida, where he died of a stroke and pneumonia in January 1947.

Nor but in sleep findeth a cure for care.
Incertainty that once gave scope to dream
Of laughing enterprise and glory untold,
Is now a blackness that no stars redeem.