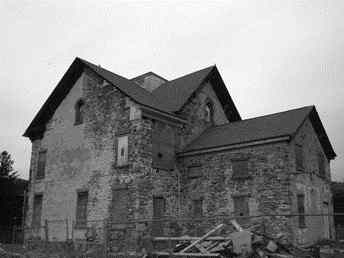 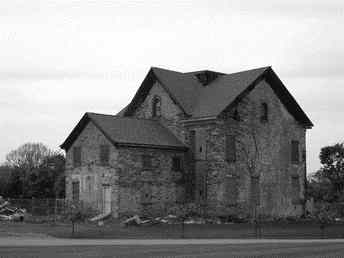 Stabilization of the historic Seward House is under way nearly a decade after the township acquired the former homestead, estimated to be 150 years old.
The council decided to immediately fund the project after Kathy Murphy, a Mount Olive Historical Society member and township grants coordinator, warned municipal officials that the township could lose the landmark because of structural damage.
This past Thursday, Mayor Richard De La Roche signed off on a contract, not to exceed $20,500, employing contractor Dave Bogert of Rockaway to perform initial stabilization work.
The dilapidated building, located on Flanders Road , is in dire need of repair.
Township officials struggled for years to decide whether to save the unoccupied building because of structural concerns.
About six years ago, strong winds from a storm knocked two large trees onto the Seward House. The trees tore through a part of the roof, damaging the interior.
A tarp was placed over the damaged section to protect the house from the elements, but it was removed last year.
The Seward House and its barn were listed on the state Register of Historic Places in 2003, but estimates of the extensive work required to restore the building pushed it to the bottom of a list of potential projects to be paid for through township open space dollars.
However, the project became urgent after heavy rains in October further damaged the Seward House.
Bogert visited the house Thursday to survey its condition.
"In the rear, there are sections where the floor has collapsed, and so, at this point, my first step is going to be going in and doing shoring to hold everything in place," Bogert said later that day.
Murphy said that about 75 percent of the house is structurally sound.
Italianate house
The Italianate-style house is located at the entrance to 267 acres now known as Turkey Brook Park. According to the township Web site, the house and the land belonged to prominent early settlers of the region-- the Wills, Coopers and Sewards -- and was owned by the same family from 1791 until 1939. The township acquired the property, including the Seward House, in 1996 using Green Acres, Morris County Open Space Trust and township funds to pay the $2.5 million acquisition cost.
Township officials say the house provided shelter for migrant farm workers in the mid-1900s, then was used for storage starting in the 1970s.
Bogert has more than 20 years' experience in improving historic structures, including work he performed on the 235-year-old Ford Faesch Manor House in Rockaway Township . He said he plans to work through December and January on the Seward House.
Once Bogert is finished with the home's initial stabilization, architect Tom Hitchins will be able to thoroughly survey the structure, study the house and fill in its history.
"Then we'll see where we go from there, once we have a better idea of what is needed,"Bogert said. "There's a lot more information that we need."
The vision is to restore the landmark and make it accessible to the public.
"This house is an elegant lady, and she needs to be brought back to useful existence," Bogert said.
Her appearance already has improved.
Tons of debris
James Lynch, township department of buildings and grounds supervisor, said his workers have removed about 30 tons of debris from inside the house.
For example, "one room was filled with Boy Scout supplies --tent poles, burlap sacks, and flyers," Lynch said.
"It was really a crime to have so much stuff in the house," he said. "It's phenomenal to take all that debris out and see the house come back to life."
Original doors and window frames and lighting fixtures that functioned on natural gas or oil are now visible without the clutter, Lynch said.
The township will not restore the Seward House to its historic state because such a project would be cost prohibitive, Robert Greenbaum, council president, said.
The vision is to restore the Seward House so that the building is consistent with its history and to make it accessible to the public.
"We would like to see the building used for meeting rooms, have offices for our rec groups and for any groups that might have use of meeting space in Mount Olive ," Greenbaum said. "Also, I'd like to see the recreation department and buildings and grounds be able to use that building in terms of their office staffing needs, perhaps freeing space in town hall."
Its progress will depend upon the available funding.
"It's not something Mount Olive is prepared to go at alone,"Greenbaum said.
The township can use money from its open space fund as seed money with which it could potentially garner grants and donations to pay for improvements. Additionally, township officials will rely, in part, on volunteer labor. 1789 (July 30) -- Samuel and Rebecca Wills purchased the property from Joshua Newbold.

TIMELINE:
1798 -- Samuel and Rebecca's daughter Anna inherited the property.
1799 -- Anna married Abraham Cooper from Chester.
1825 -- Anna and Abraham passed the property on to their children, Nathan and Beulah Ann Cooper.
1825 -- Beulah married Henry Seward, a cousin of William H. Seward, Lincoln’s Secretary of State.
1857 -- Beulah and Henry acquired ownership of the property.
c. 1858 -- the mansion built. The mansion had 9 large rooms, a grand staircase at its center, chandeliers, ornate mantels and a wrap-around porch. Architecturally, it is an example of 18th century stone construction in a mid-Victorian style. Rosewood farm was known for its prize winning livestock.
1920s -- the property served as an airstrip.
1939 (November 30) -- the 270 acre property remained in the Seward family until this time.
1939 -- the Maier brothers purchased the property and created the pond bearing their name and used the property as a vegetable farm.
1970 -- the property was sold to developers, but the land was never further developed.
1996 -- Mt. Olive Township purchased the property.
2005 -- Mt. Olive Township began emergency stabilization of the Seward Mansion, after the back of the house began to further collapse. 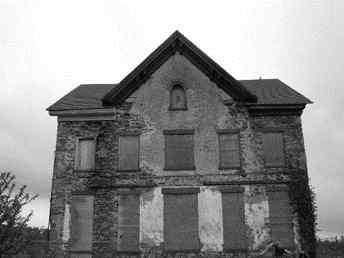 RESTORATION:
Standing (for the time being) at the entrance to Turkey Brook Park stands the remnants of an old building that doesn’t look like it’s going to stand much longer.
The Township Council is expected to take the matter up at next Tuesday’s meeting in the municipal building.
Residents know the building as the old Seward House, an early 19th Century mansion. The estate dates back long before the American Revolution.
There could be controversy among the many who see the building’s historical value as the connection of the township today and its past and others who see another considerable sum of money needed to save it in a very difficult financial time for the township.
There is a third option however, and knowing of Kathy Murphy’s record for obtaining grant funds, it’s a safe bet that that will be the route the governing body will take.
She has said she believes she can obtain a financial grant from some source to cover most, if not all of the cost, for refurbishing it.
Murphy is the township’s grants administrator. She has proposed the township make just enough funds available from its municipal Open Space Trust Fund to stabilize the building through this winter. In the meantime she will explore possible grant funding from Morris County or a private foundation.
To stabilize the building debris that has been gathering for 40 years would have to be removed, provide support for a part of the floor and wall structure that has collapsed and then drape the building with covering to keep water out.
The building was owned and the 269 acres farmed until the 1930’s when it was auctioned for tax liens. The township purchased it and some of the lands around it with green acres funds in 1996. It was the start of several land purchases that is now Turkey Brook Park.